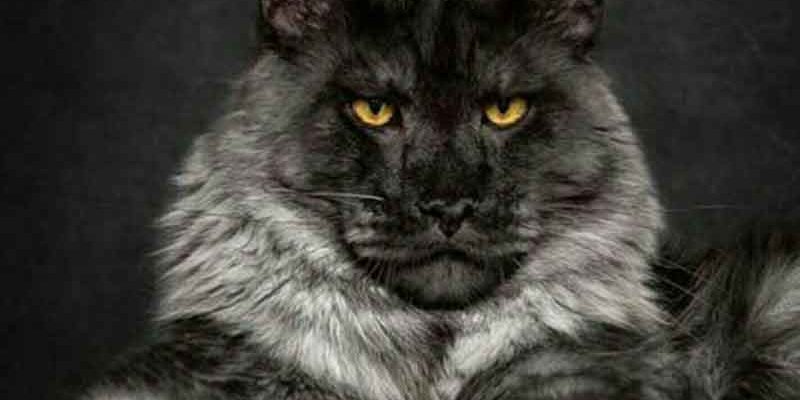 The Maine Coon is a cat breed that’s available in a wide range of different colors.

That’s due to natural and breeder-conducted crossbreeding.

The smoke-colored Maine-based breed is available in patterns like tabby and tortie and is amazingly eye-catching compared to other colors like orange, silver, blue, and white.

The Smokey Color In Maine Coons

However, the main difference is in the hue of the undercoat. In fact, it’s tough to determine if the cat is black or smokey until the body has some white.

Smoke is a semi-solid color but also includes some “fade” on the feline’s undercoat.

Several of these Maine Coons also have fade on the chest, which can be visible when the cat is sleeping upside-down, for example.

The dark color is created by color-blocking genes.

The cat’s hairs seem to be a solid color but are actually banded. In other words, the hairs are dark at the top and light close to the bottom.

One way that breeders produce smoke-colored kitty cats by using the dominant silver gene and a recessive solid color.

These cats are similar to “shaded” and “chinchillas” although some technical differences exist.

Common Variants Of The Smoke Color

If you want a Maine Coon with a color that’s similar then here are some variants:

This is the closest variant of Smoke Maine Coons.

In fact, many felines that are judged to be black at first glance are actually smoke.

A black cat has thick black hair from head to toe. They also have black noses and brown eyes.

Unlike smoke fur, the undercoat of black cats is all black without any white. If the cat has some grey in the ear tufts and chest, it’s still black.

However, if there’s grey in the undercoat then it’s technically a smoky cat.

The color is quite rare and includes smoky silver and silver cameo felines.

The black silver tabby is another popular Maine Coon breed.

Due to the complicated genetics involved silver is one of the rarest cat colors.

Other include Chinchilla, Chocolate, and Lilac.

The blue color itself is complex because it’s not the hues we often think about like navy, royal, or sky.

There’s a touch of silver in these cats’ hair. In fact, the blue Maine Coon’s fur includes some smoky color in it although it’s technically not a smoke-colored cat.

If you have a kitten, it might take several months until the undercoat develops.

That’s when you can determine whether it’s a true blue or smoky blue cat.

The Red Smoke Maine Coon is another variant that includes the smokey color.

It’s an interesting blend since it includes the breed’s brightest color and one of the darkest ones.

Red Maine Coons are among the most famous colors.

It’s worth noting the cat isn’t a bright red but instead an orange/ginger blend.

The reason is genetics make it rare for female cats to have this color.

The color is always on the X chromosome so in females the two X chromosomes usually combine to form a different hue.

Yet another variant of the Smoke Maine Coon is the Cream Smoke cat.

The color is close to the White breed but is slightly darker.

Cream can be a solid color or combined with other colors like Smoke or White.

In fact, it’s more common for the cats to be c combination of colors.

The most common version is the Cream Cameo Tabby.

Like other colors of Maine Coons, the Smoke color exists in different patterns.

They include solid, tabby, and tortie.

Tabby cats often have stripes like Garfield while the tortie pattern resembles a turtle shell.

Valkyrie has been compared to the cats portrayed by human actors in Andrew Lloyd Webber’s famous musical “Cats.”

Valkyrie was born in January2 018. She’s named after the maidens in Norse mythology who served the god Odin.

The kitten became publicly known when her cat breeder posted pictures of the interesting kitty cat on their website.

Interestingly the original video got fewer than 9,000 views.

One Facebook page racked up 9.8+ million views due to the famous smokey Maine Coon.

Users made several comments about the human-like cat.

They included ones like “extremely creepy” and “Renaissance paintings.”

A big mystery is why the Russian cat is making the sad expression to begin with.

The reason is domesticated cats and dogs have evolved certain expressions to communicate with their owners.

One theory is the next evolutionary step would be for Fluffy and Fido to develop a more human-like faces so their owners can read the expressions easier.

While that’s debatable, there’s no question Valkyrie is cute and adorable.

It’s worth noting that the Russian cat has already been sold.

How Common Are Smoke Maine Coons?

The smoke color is relatively common like other solid colors including blue, red, and brown.

It’s important to research whether a certain color combination is accepted under the CFA’s standard.

So, if you want a Smokey Maine Coon search for a breeder whose specializations include Smoke.

The Smoke Maine Coon is easily one of the most eye-catching variants of the US-originated breed.

They’re close to black cats but actually include a lighter undercoat.

You can also see them in solids, stripes, dots, and blotches.

As always, it’s advisable to find a professional breeder like CFA members in order to get the best results.

3 thoughts on “The Smoke Maine Coon”