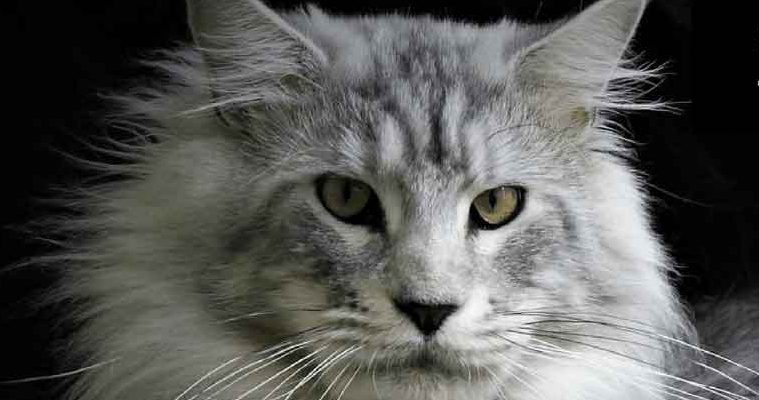 Maine Coon cats are a popular breed of feline. They have unique features, and a hunting ability is their nature. The have a sweet and gentle nature, which is why I like them. The variety of colors they come in results from crossbreeding through natural means or via breeders. Silver Maine Coons come in very different fur patterns and look very striking to most people. 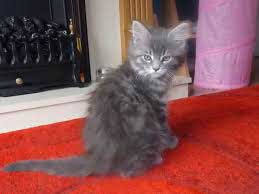 This color of Maine Coons is also known as the “smoke” color. It includes a silver undercoat and exists on a solid-colored Maine Coon.

It’s interesting to note that the silver undercoat might be tricky to notice in kittens. That’s because the silver color will become more visible as the little cats grow older.

Also, several smoky cats also have a faded area on the along the chest section. You’ll notice it when the cat is playing or sleeping upside-down, when you ruffle the fur.

The silver is sometimes combined with other colors on the Maine Coon. For a cream-colored kitties might also have other colors like silver, cream, or white.

Common Variants of the Silver Color 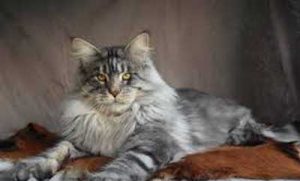 Maine Coons are available in a wide range of colors and patterns. Sometimes there seems a bewildering choice available. Often the same litter of kitties contains several different colors.

Silver Maine Coon colors such as solid silver or smoke originated from the two primary colors of black and red. The only exception is solid white Maine Coons because the color covers up the black or red coat.

The primary patterns of silver Maine Coons are solid, torties and tabby. Solid smoke-colored cats have faint tabby markings, which are as “ghost markings.”

These markings can include stripes, white chins, and white around the eyes. It’s worth noting these markings are most common among red or cream-hued Maine Coons.

The Silver coat which is the result of the “dilute genes” of red and black domesticated cat’s parents. Different shades result in different shades like silver.

There can even be variance in different solid colors. This varies from hues like light blue-grey to dark lead-grey.

This color variant of Maine Coons isn’t a royal blue or sky blue but instead is a blue shade with a little silver. These cats usually exist in solid colors and the eyes are gold/green.

The blue Maine Coon’s body or fur are smoky blues while the nose and ears can also be blue or blue shade.

These Maine Coon cats are eye-catching like the blue variant. As the name suggests, gray blends into the blue coat. The blue or grey cat exists in solid colors although it can be combined with other colors.

The nose and ear tufts of the blue or grey Maine Coon are grey or black. 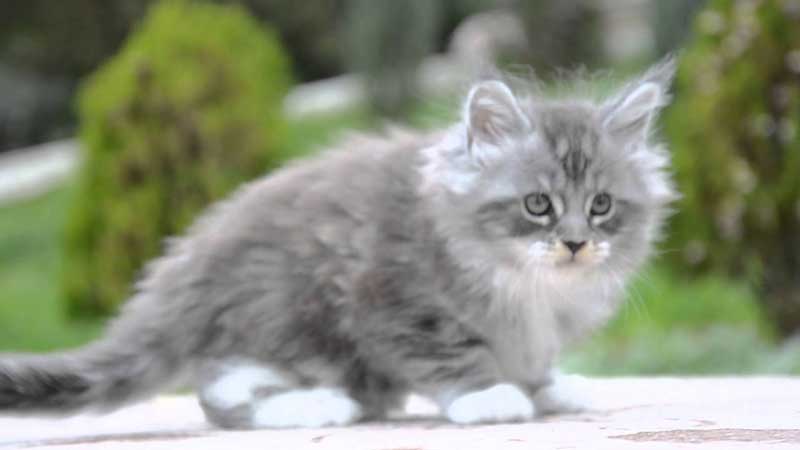 A black Maine Coon has thick black fur from head to toe. Yet, it’s worth noting some cats have a small grayish area located on the chest and ear tufts. The undercoat might also have a grey color, which gives it a smoky aesthetic.

All color variants of silver Maine Coons can include white. This results from the white-spotting gene. The amount and location of white on the cat’s fur can vary including: 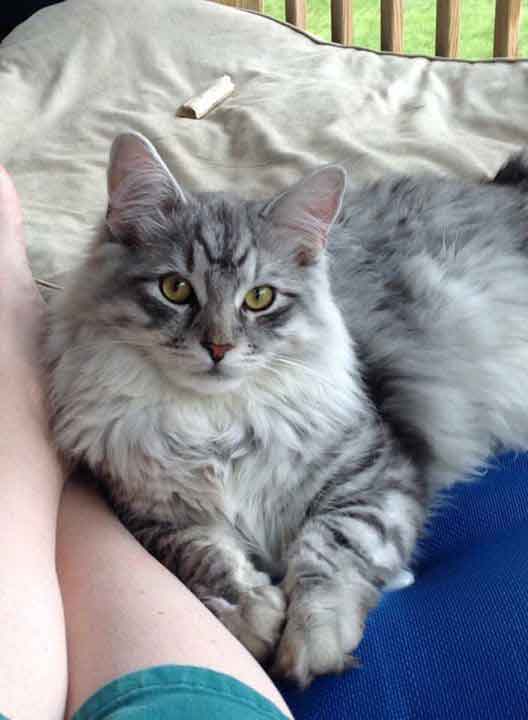 Cygnus entered the 2018 edition of the Guinness World Records. He holds the record for the longest tail on a domesticated cat. It measures 17.58 inches (44.66 cm). Fun Fact: the average length of a male cat’s tail is 11 inches, so Cygnus’ tail is about one-third longer than average.

Cygnus owners, Will and Lauren Powers said it is challenging to own a long-tailed Maine Coon. For example, they have to be careful when closing doors or walking around. Besides, Cygnus sometimes dips his tail in stuff due to the far distance from his body.

Meanwhile, Arcturus’ record-breaking cat is 19.05 in. (48.4 cm) long and weighs around 30 pounds. The Savannah cat eats about 1.5 pounds of food per day and can stand at the dinner table to eat food.

The two kitty-cats bond together well and often chase/play with each other. They also groom each other and sleep together.

Will and Lauren apply for the world records to raise awareness for the cat shelter they run together. Visitors can take selfies with Cygnus and Arcturus if they make donations to help needy cats.

How Common Are Silver Maine Coons?

Silver Maine Coons are unique compared to all other cat felines. It’s difficult to breed, so it requires the skills and experience of a professional breeder. The reason is the coat is different and shinier than basic “grey” cats.

The silver Maine Coons have different color combinations that the silver cameo tabby.  Other combos include the silver tabby and smoky silver. 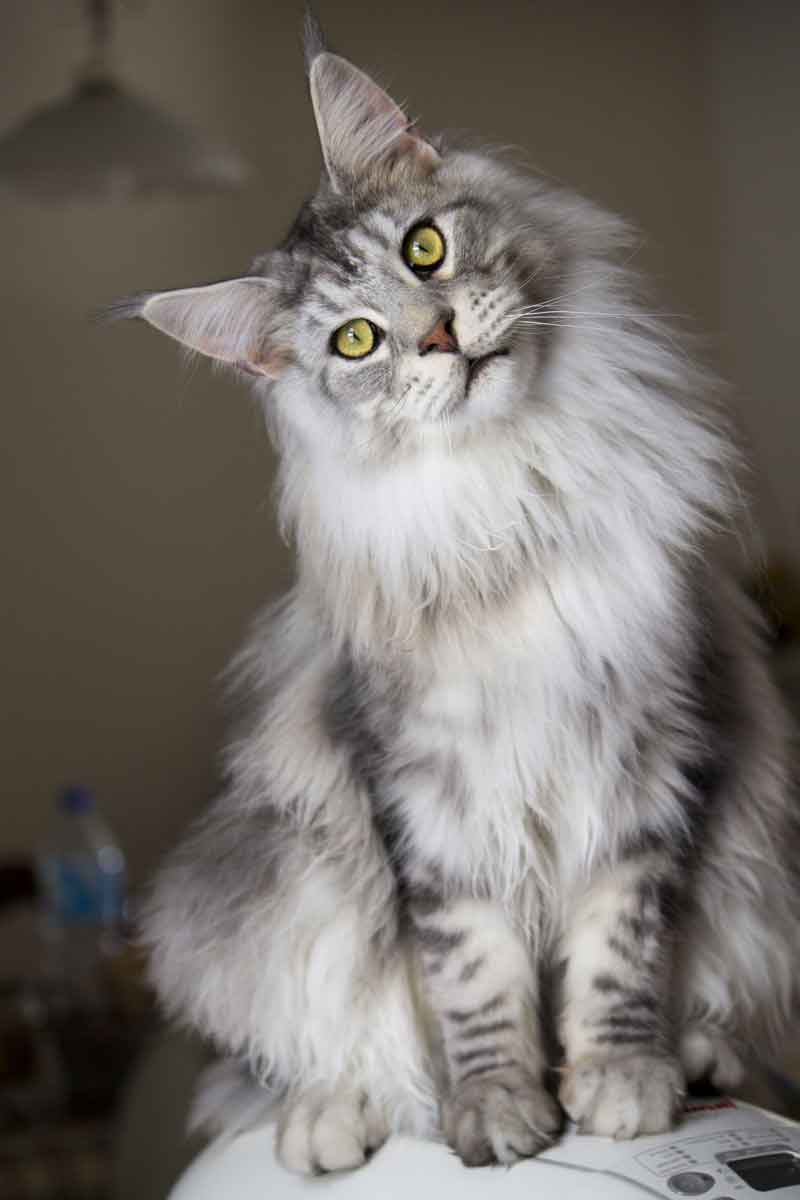 The Silver Maine Coon is one of the most lovely variants of Maine Coons. They’re shinier than basic grey cats and can include patterns like stripes and dots. Grey undercoats are less popular so it’s another reason finding a silver cat is more challenging.

3 thoughts on “The Silver Maine Coon”