There are a wide range of colors within the Maine Coon breed. Much more than just your standard black and white cat.

In fact, there are over 30 different variations!

We have done the paw work and put together an extensive list of colors, combinations and patterns. If you are looking for your ‘new owner’ then hopefully this list may narrow it down for you.

The clue is in the name. A solid coloured Maine Coon will consist of just one color.

These are most commonly black or white. They also come in the lesser common colors of red (copper/ginger color) or blue (dark grey color).

The overcoat and undercoat of your cat will be the same colour, with no other markings visible. Ensure you check the undercoat to ensure a streamline colour. 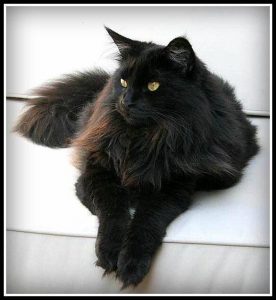 A black Maine Coon is (unsurprisingly) completely black, although the fur around the paws may appear slightly dark brown.

The overcoat and undercoat are the same pitch black color and there is no sign of rust (a reddish color that can be seen in sunlight).

If this is the color you want in your Maine Coon, be sure to check the undercoat against the light, this will ensure you are getting what is advertised.

Red Maine Coons are quite striking with their orange/copper look.

They come in different types of red, such as solid, red tabby, red smoke, or red with white.

Their noses are usually a pink color which compliments the red pigment of their fur.

Maine Coons with this color (or lack of color) look extremely bright and pure.

Due to the genes, breeding a completely white Maine Coon can be a meticulous task and requires a lot of planning and research.

The gene that makes it white is also known as a ‘asking gene’ and cannot be passed down.

The cream Maine Coon is similar to the white breeds, they look just as stunning but have an off-white, cream tinge to their fur.

This is usually achieved by breeding a white Maine Coon with a cream colored one.

They can come in different variations such as cream tabby, cream cameo and solid colored Maine Coon.

Again, their genetic make-up comes into play here. There is a gene which makes their fur appear as though it is rusting.

When viewed in sunlight, you can see a slightly orange tinge in their fur which looks like rusted metal.

If you’re looking to home the more obvious brown coloured Maine Coon cat, these can be bred in different variations, some of which include tabby and tortoiseshell. 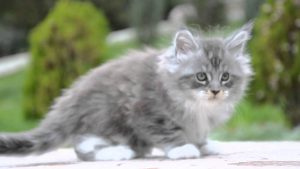 Silver Maine Coons are one of the rarest colors and usually require a professional breeder.

But despite this, a solid silver color is not usually achievable.

Most “silver” types are a combination of colors/patterns such as the silver tabby, cameo or smoke.

The striking blue Maine Coon is mostly found as a solid colour.

The blue has a slight silver tint.

If the cat has yellow eyes, the gorgeous deep blue is only accentuated.

A favourite of many Maine Coon admirers, this colour can be bred well with white but is equally (if not more) beautiful if left solid.

One of the most popular coloured Maine Coons has to be the tabby. Due to them having a mixture of colors, there is a huge number of variations you can choose from, over 60 at least!

Depending on the colors chosen and the breeder’s cats, the patterns may appear as stripes, swirls or patches over the cat’s body.

Similarly to smoke, the shaded Maine Coon usually consists of a solid color with a lighter shade underneath.

This choice makes the cat’s colour look less solid and gives variation in the tone and, as the name suggests, the shade of the coat.

These Maine Coons are majority tabby, but with white chests and paws.

This gives them specific markings which are easily identifiable.

The more common of this type of Maine Coon are usually black and brown which makes the white look striking against it. 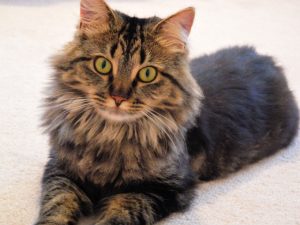 The term smoke refers to the silver undercoat of a Maine Coon’s coat. The smoke effect usually appears on the undercoat of a solid coloured cat with a darker shade above it.

As seen in most smoke coloured cats, the overcoat will be one color and the undercoat will be a lighter shade, often referred to as ‘silver’.

If you are wanting a solid colored Maine Coon rather than the smoke coloured, always have a good look at the undercoat as you will see a difference in the shade of colour.

The red shading on the upper side of the body compliments the subtle silver of the lower side.

The icing on the cake is four white (as snow) paws. 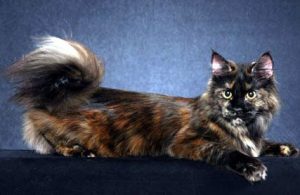 No, these don’t retreat into a hardened shell when scared or sleepy!

Tortoiseshell Maine Coon’s have a black undercoat and sporadic patches of red, brown and creamy tones throughout the rest of their coat.

The typical thought that pops into most people’s head when they think of a cat is usually, black and white.
We think that the sharp white against the dense black of a black and white Maine Coon gives it a great, clean cut look.

The undercoat and chest area of this type of Maine Coon are white, and the rest is black.

There is certainly a huge variety when it comes to Maine Coons and the choices seem to be endless.

All are beautiful and distinct in their own way, and we’re sure the color you chose will join the long list of our favourite colored Maine Coons.

To help you choose, should it be an issue, please feel free to watch the video below. It runs through a range of colors and may help you decide.