The Polydactyl Maine Coon – Why Some Cats Have Extra Toes 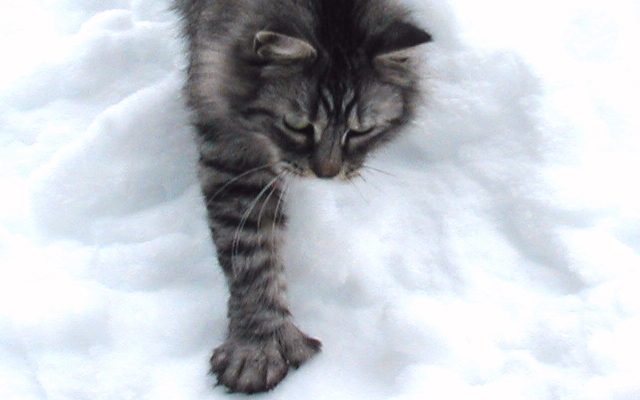 The Polydactyl Maine Coon – Why Some Cats Have Extra Toes

Polydactyl cats, also known as Hemingway cats, got their name from the Greek origin word, polydactyly which means many or extra toes.

Unlike humans, dogs or any other species, where this trait does not occur that often, among felines is pretty standard and affects the cats predominantly from the US, Wales, and England.

An average cat usually has 18 toes, four of them are on the back paws and five on the front legs. A polydactyl cat can have to up to eight toes on each leg.

Polydactyl cats are born with extra toes because of a genetic mutation which was first recorded on the ships out of Boston passed down to them by one of their parents.

A kitten born with this mutation is not on any danger and can lead a normal life like any other cat.

The only danger that can occur to these cats is an infection or some small complications which are usually surgically removed.

A lot of myths and folk stories surrounded these animals which they are also known as Hemingway cats, getting their name from the famous writer, and a fact acknowledged about him is that he was the owner of many cats and more than half of them were polydactyl.

Moreover, the polydactyly was predominantly found in the Maine Coon breed, and more than 40% of them have had this trait.

A few years back the Polydactyl Maine Coon cat was getting bred out by the breeder, but in the past years, it has started to make a comeback and gain more and more popularity.

A polydactyl ginger tabby cat holds the record for the most toes with 28 digits, and each toe had its pad and nail.

Looking back a few hundred years it seems these cats were pretty popular among the ships which sailed between Britain and New England and there is still some controversy where they occurred first.

Their popularity was achieved at that time due to their fantastic hunting skills, and they helped to prevent the rodents from overpopulation.

The Maine Coon breed is believed to be the first breed of cats to be born with this specific trait and, nowadays, it is still seen with them.

The official state cat of Maine, the Maine Coone is one of the oldest and largest breeds in North America, but there is no record with the exact origins of this cat.

Some hypotheses arose around the story of how the Maine Coone came to live in North America, but most of them are only folk tales with no solid ground.

A folk tale suggests that Marie Antoinette, the Queen of France tried to escape the country along with her favorite cats from the Turkish Angora breed.

She didn’t make it to North America, but her cats reached Maine where they mated with short-haired breeds.

The hypothesis which is generally accepted by the cat breeders’ community states that the breed resulted from the mating of local short-haired breeds with long-haired breeds brought from overseas.

There is a strong resemblance between Maine Coon and the Norwegian Forest Cat. In the late 19th century this specific breed was favorite in cat shows, but they saw a decline in popularity when another kind of long-haired cats was introduced in the 20th century.

Yes, polydactyl cats are born with extra toes, and this is diagnosed on the physical exam, where the veterinarian can see the extra toes and determine if they are bones or overgrown tissue.

In most cases, polydactyly doesn’t require treatment and the kittens will lead a healthy life.

Polydactyly is of two types, preaxial where the extra toe grows before the dew claw and postaxial where it expands after the fourth phalange.

This genetic mutation is passed down from a polydactyl cat to its offspring, and because this gene will override other normal genes, even if only one parent possesses the trait, there is a high chance that the kitten will be born with extra toes.

Are Only Maine Coons Polydactyl?

Some rumors suggest that the first breed with polydactyly was the Maine Coons breed.

Some mistake polydactyl cats as a specific breed, but any cat, no matter the race can be born with extra toes. However, the Maine Coon cats are the ones assimilated with the term polydactyly, and the mutated gene is predominantly found in this breed, more than any other kind of cats.

Due to this fact, a polydactyl Maine Coon cat aided by the extra toes became excellent hunters and if they are let to progress naturally to will gain the ability to use those pawns in ways we can’t yet imagine.

Are All Maine Coon Polydactyl?

Not all Maine Coon cats are polydactyl, and the breeders tried to breed out this mutation, and no veterinarian would advise you otherwise.

Even the risk of developing an infection or any serious health problems because of polydactyly is close to none, there might still appear some complications, so they do not support the breeding of Polydactyl Maine Coon cats.

The genetic anomaly, even if it was breed out of the Maine Coon is slowly starting to make their way back into the mainstream as its gaining popularity.

If the breeders wouldn’t have tried this, and the cats would have mated naturally, it is estimated that a 28% of the Maine Coon breed would have had this trait.

Polydactyly doesn’t produce any other health complications in most cases, but the owners should keep a close eye on the pawn in case of complications as nail overgrowth or soreness.

This unusual trait is more of an oddity than a deformity, and the cat’s health is not in any imminent danger and can play and run like any other cat.

What Does It Mean From the Point Of View Of Ownership?

A little bit more attention coming from the owners of the Polydactyl Maine Coon cats should keep their pets away from any danger.

Some happy owners claim there haven’t encountered any difficulties in raising and grooming these marvelous cats.

Owning a polydactyl cat shouldn’t be so much different than being the owner to a normal one, just a little more care.

If you are the lucky owner of a Polydactyl Maine Coon cat, you should buy for your favorite pet a scratching post. Having extra toes means it can destroy your furniture faster than an average cat.

As a side note, as an owner, you should make sure that your cat doesn’t suffer from feline radial hypoplasia which like polydactyly cause the growth of extra toes, but they grow the same size as the normal ones and breeding the cats with this mutation can affect the next generations and cause severe paw deformities.

Is It Painful For The Maine Coon?

The polydactyl cat doesn’t have any difficulties in running and playing and having an extra toe is not painful for them.

It is worth mentioning because of their anomaly they gain more dexterity and agility, making them incredible hunters. The sailors didn’t consider them lucky for no reason.

In some case, polydactyly can cause infections, or the mutation of the genes can spread and result in heart complications.

Surgical removal of the extra toes is a preferred method chosen by some owners, lowering the risk of an infection or an injury.

Does It Affect The Maine Coon’s Balance Or Hunting Skills?

The polydactyl cats were famous few centuries ago because of their amazing skills as hunters.

The extra toes aided the cats to gain a better balance and to be more agile.

Most sailors wanted to have these kinds of cats aboard because they were considered lucky and they were recognized for their talent to keep the rats in control.

The polydactyl cats are not as common as they used to be, but a growing trend made them gain more popularity, and they aren’t any longer being bred out by the breeders on purpose.

If this will happen in a few decades, the offspring of these polydactyls can learn how to use their extra toes better, and maybe humanity will witness some things considered now impossible for a cat.

Here’s a video that may help you decide;

The Maine Coon cat adapts to all kind of personalities and lifestyles, he will receive attention gladly, but it is not dependent on it, and if you don’t have time for petting, the cat won’t ask for it.

They are famous for being agile hunters so no mice will enter your premises while a Maine Coon cat is watching over.

Being the owner of a Polydactyl cat isn’t more difficult than being the owner of an average cat, and usually, no special treatment is needed other than checking once in a while for their extra toes, making sure everything is alright.

Owning a polydactyl Maine Coon cat or any other breed of cats makes you responsible for them so extra or no toes you should cover for their needs.

Here’s a good video to watch;

Tags :
The Polydactyl Maine Coon – Why Some Cats Have Extra Toes