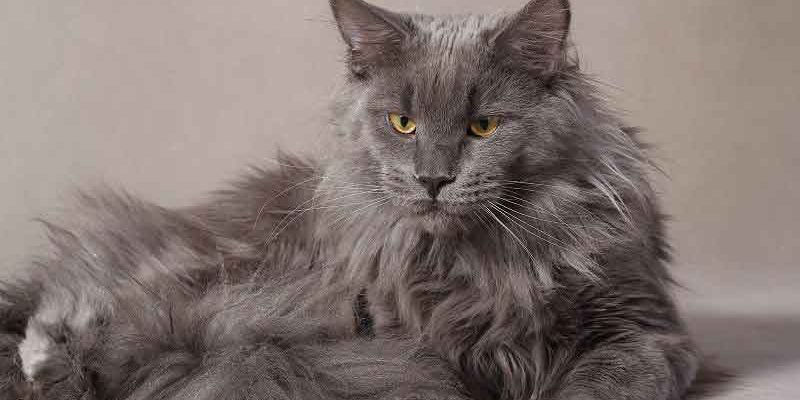 Maine Coon felines are available in a cornucopia of patterns and colors that result from crossbreeding that occurs naturally or through professional breeding.

Like almost all the base colors that a Maine Coon can come in, there is a bewildering array for your senses.

The Grey Color In Maine Coons

It’s important to note that some of what are referred to as blue Maine Coons are actually grey.

There’s some overlap in the terms used to describe the hues of feline coats.

In another example, “red” cats are also referred to as “orange” since they’re not bright red. Or ginger, depending upon the accompanying colors.

Another issue is the difference between “grey” and “silver” cats. In the case of Maine Coon tabbies, the color is based on the cat’s ground/base color and stripes.

Here are some examples. if a tabby has grey stripes on a grey background, then it’s a grey tabby.

Meanwhile, if the kitty-cat has black stripes on a light/white background then it’s known as a “silver tabby.”

The dilution gene is responsible for grey-colored cats. A recessive gene turns the cat into a blue/cream color, which is a blend of soft grey and cream.

It’s this gene that also turns black cats blue/grey. When a cat is a blend of grey/cream, this can be big patches and/or stripes.

You can also conduct a careful inspection to determine the type of cat you own. Inspect the hairs located on the tail’s tip to determine if the animal’s main color is grey.

They should appear as a solid color for the hair’s full length.

You can also inspect the cat’s agouti hairs to figure out its “ground color.” These hairs will be lighter than the hairs on the tail’s tip.

Common Variants Of The Grey Color

Like other hair colors, you can find Grey Maine Coons in a wide range of different patterns. The solid grey coat is the most basic pattern because it just contains the grey coat.

The most iconic type is the tabby with markings like stripes, blotches, and spots. These include classic, mackerel, and patched tabbies.

Another type of pattern is the tortoiseshell or “tortie.”

You can also find Grey Maine Coons that include a blend of these patterns. They include tabby/tortie that combine markings like stripes, spots, and blotches.

The “grey” Maine Coon is actually a blue Maine Coon that has grey blended in.

In fact, the blue variant itself isn’t really a true blue. It’s blue with a touch of silver.

The majority of blue Maine Coons have a solid pattern with green or gold eyes.

The fur is smoky blue, and the ear tuffs/nose can be blue or white. The Blue Maine Coon can also have white on the chest or undercoat.

The Brown Maine Coon is the iconic variant of the breed and is the first image people often think of when they hear “Maine Coon.”

You can find many Maine Coons with a blend of brown/grey colors.

It’s quite easy for breeders to breed brown cats.

The Brown variant of the Maine Coon is similar to neighborhood/alley cats people see daily.

Several options are available including blends with grey, cream, cameo, and white.

However, it’s important to note that a truly brown chocolate/cinnamon brown is very difficult for breeders to achieve.

What you typically see in domesticated cats is actually a faded black.

The solid-black Maine Coons include a deep black from head to toe.

They can also have grey areas on the chest and ear tufts. When the feline’s undercoat is grey, this cat has a black/grey or “smoky” appearance.

This is a close variant to Grey Maine Coons. Some examples include silver tabby, silver cameo, and smoky silver.

The most famous variant is the silver cameo tabby with its bright colors.

It should be noted that the silver coat is quite difficult for breeders to achieve.

So, if you want a Silver Maine Coon, it’s critical to pick an experienced and skilled breeder so you’ll get top-notch results.

This is based on Guinness World Records awarding titles for the world’s tallest and longest cat. In terms of height, the tallest domesticated cat is a Savannah breed named Arcturus.

However, in terms of length, Stewie was the “biggest” house cat. From nose to tail the Grey Maine Coon was 48.5 inches (123 cm) long.

Mymains Stewart Gilligan entered the record books in 2010 when the record length was recorded. Stewie’s owner Robin bought him from an Oregon breeder in 2005.

While Stewie was a gentle giant, he was also described as “social” and liked to make new human friends. He sadly passed away in 2013 at 8 years old due to cancer.

How Common Are Grey Maine Coons?

The most common colors of Maine Coons are white, cream, blue, and black. Grey is less common but is often seen in hybrid colors with hues like blue and black.

These tones can be just as eye-catching as solid grey Maine Coons. It’s also worth noting grey cats aren’t as rare as other hues like chocolate/cinnamon brown.

One issue to consider is the demand for grey undercoats is generally lower than other colors.

So, based on the laws of supply and demand it might be tougher to find grey Maine Coons.

The good news is you can find breeders who specialize in certain colors like grey/silver.

The Grey Maine Coon is easily one of the most eye-catching variants of the big breed.

They’re not as shiny as silver cats but can still include color combos and patterns like tortie and tabby.

Grey Maine Coons are less popular than other colors, but they can still be a wise choice for pet owners.

2 thoughts on “The Grey Maine Coon”