The Calico Maine Coon has distinct markings compared to the cat breed’s other patterns like solid, tortie, and tabby. This results from crossbreeding that’s done naturally or through breeding.

Outside North America this pattern is often known as “tortoiseshell” or “tortie,” but there are slight technical differences. These felines are bred in different colors. They usually have a white base color with patches of cream and red/orange. The similar tortie pattern has small patches, and the tortie has stripes.

The term “calico” refers to a certain pattern on a cat’s coat. The fancy names for this type of genetics are “dense” and “dilute” calico. There are different color combinations like black and white, red/orange, and white and blue/gray.

Scientists have been studying cats with these patterns since the 1940s. This includes research about the felines’ X chromosomes that caused a distinct pattern. Fun Fact: The calico cat became the State of Maryland’s “State Cat” in 2001.

One interesting feature of these cats is the pattern is always different. In fact, the combinations are almost as high as the number of snowflake patterns! You’ll never find two adult or kitten Maine Coons with the exact same markings.

There are also a few interesting facts about calico cats in terms of gender. They’re nearly always female. Meanwhile, the males are nearly always sterile. So, if you have a male there’s almost no chance of breeding the same-patterned cats.

Calicos also seem to share the personality of tortie cats that are known as “tortitude.” This makes them sassier and more independent (even for cats). However, they’re also loyal and friendly. 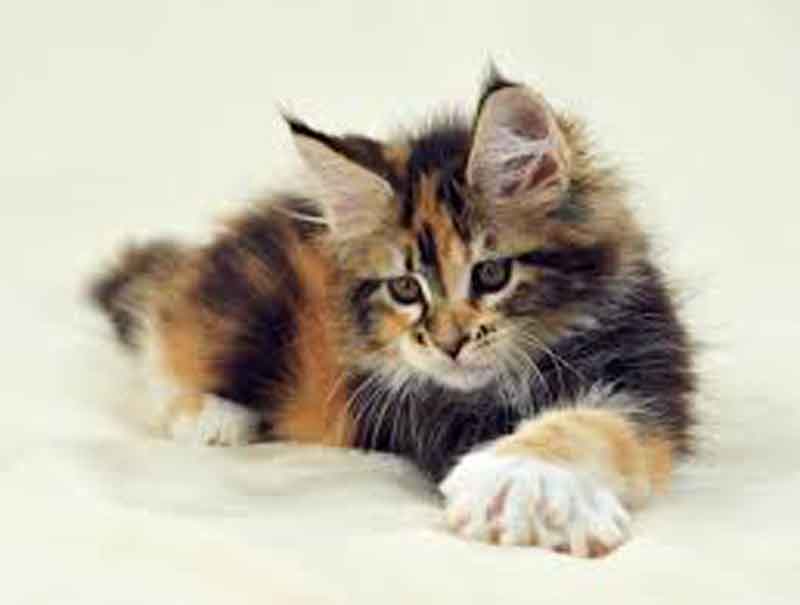 Common Variants of the Calico Pattern

A Calico Maine Coon always has three colors. However, only certain combinations can be defined in this category.

One of the main types of calicos is the dense variety. This these colors are dominant, so they’re the most common types of calicos. These cats might include the “dilute” genes, but they’re recessive genes. The dense calico color combinations include:

This is the other main type of calico cat. The term “dilute” means the cat’s color is less intense compared to the dense variety. For example, black becomes blue, red becomes cream, blue becomes smoky gray, and cream becomes light red/yellow. Some other dilute colors include fawn (dilute of cinnamon), and lilac (dilute of chocolate).

. Here are some color combinations that are sometimes found in the dilute variety:

One reason this type of Calico Maine Coon is rare is based on genetics. Here’s how it works. A “mosaic gene” allows for two basic colors instead of just one. There’s the “white “spotting gene” that makes some parts of the coat while. Then there are the “dilute markers” of the coat’s two main colors.

A dilute pattern can exist when all of these markers exist in a cat’s genes. The two main types of genes are dominant and recessive. The weaker dilute genes make Dilute patterns less common than Dense patterns.

The calico’s patterns and genetics are very similar to Maine Coons with tortoiseshell/tortie patterns. For example, a tortie with white is actually different than a calico yet the two patterns are similar.

What’s the difference? The main one is torties have red and black throughout the cat’s coat. On the other hand, calicos have solid-colored patches on their body.

Sometimes these cats have patches of different colors on their coat. These “calitorts” are even more difficult to distinguish from torties.

This is technically a calico cat. However, besides the patches of black and orange, it also has tabby stripes like Garfield. A tabby’s patches can also include tortie patterns.

These issues about how a Maine Coon’s patterns are classified are very technical. You can find breeders who work exclusively with Maine Coons of certain colors and/or patterns. It’s highly advisable to select one who specializes in the particular ones you’re looking for. This is especially true if you’re looking for rare varieties like silver or Calico cats. 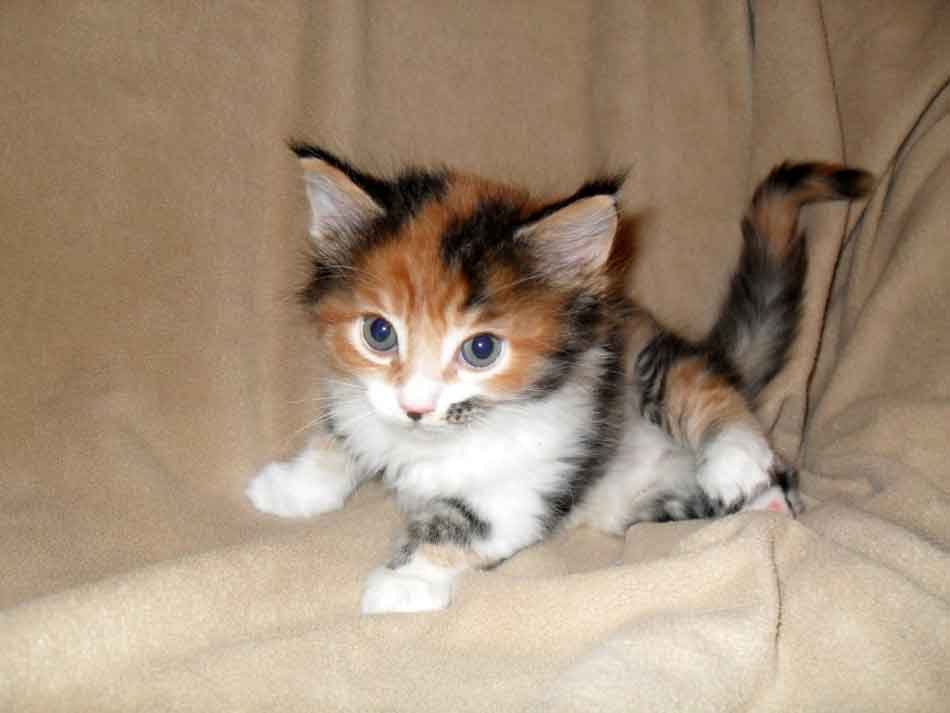 This Calico Maine Coon is now unable to win cat shows due to a rule change made by the Cat Fanciers’ Association (CFA), the US-based organization that has the world’s largest registry of cat breeds.

Dawntreader is named after the Texas-based cattery he was born in named Dawntreader Maine Coons. The rare feature of Dawntreader is he’s a male and also a Calico. This combination is quite rare. Mother Nature Network reports that only 0.003% of these patterned cats are male.

Veterinarians rarely work with male calicos. In fact, many who have worked with felines for decades have never seen one. Dallas veterinarian Brittney Barton told Newsweek that it’s almost “genetically impossible” for a Calico cat to be male.

Dawntreader’s coat includes a white, orange, and black coat. This is one of the common combinations for this pattern.

CFA ruled that Calboy’s patterns were a genetic defect. That’s because he’s a “chimera” cat who has a pair of DNA sets. CFA argued that Calboy’s genes could have a negative effect on the breed.

Calboy was permitted to participate in the “best in breed” category during a cat show in Houston, Texas. However, based on a rule change that was implemented in February Calboy is unable to win championships at CFA cat shows. That’s due to his rare genes.

Since the Houston cat show, Calboy has participated in a cat show sponsored by The International Cat Association (TIFA), which is one of CFA’s competitors. TICA’s president said Calboy is “welcome” to participate in the organization’s events.

How Common Are Calico Maine Coons?

Calico Maine Coons are quite rare. This is due to the complex genetics that produces Calicos. Other rare patterns include silver and chocolate varieties of the big cats. It’s advisable to select a breeder who specializes in Calico Maine Coons. This will help to make sure you get a Calico instead of a Tortie.

Another key issue is Dilute Calicos are less common than Dense varieties. That’s due to the greater influence of dominant genes versus recessive genes in determining the cat’s colors.

The Calico Maine Coon is one of the rarest and attractive Maine Coons due to the tri-color pattern. This adds to the intrigue of the only US-based cat breed, which originated in the New England region.

They’re also available in a wide range of colors including red, blue, cream, and lilac. When buying a Calico Maine Coon make sure to find a CFA-certified professional breeder.

6 thoughts on “The Calico Maine Coon”