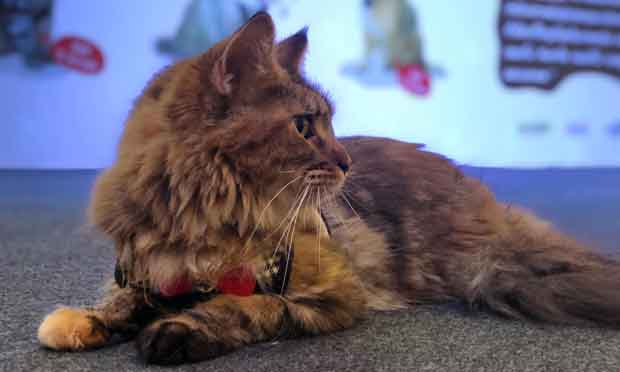 If you buy from a breeder then the parentage of your Maine Coon kitten is more assured.

If you buy from private sellers then there is less proof that the kitten you have selected is pure Maine Coon.

Many cats can have a ‘Maine Coon’ look, but what are the physical traits that are more unique to the Maine Coon breed?

So what are the ways to tell?

How can you tell if your cat is part Maine Coon?

The Maine Coon is a strong muscular cat with a rectangular frame and triangular face that ends in a wedge shape. They have distinctive ears, tails, and trills and chirps very unmistakably. They have dog-like characteristics that make a Maine Coon very identifiable.

The Maine Coon can be quite distinguishable if you know what to look for.

The Maine Coon Has A Rectangular Body

You can sometimes tell if a cat is part Maine Coon by one of the most notable characteristics, which is their physical build.

Cats with strong, rectangular, muscular bodies are highly likely to be descended from Maine Coons. Not that other breeds aren’t but Maine Coons do have this feature.

The Maine Coon Is A Large Cat

While not all Maine Coons are big, if your cat is of large size then there are only a few breeds that reach the size of a Maine Coon.

There are numerous Maine Coons from 20 to 25lbs though, and that’s a big cat.

Most breeds won’t get anywhere near that big.

Size won’t be a truly effective indicator as Maine Coon’s can also be small.

Alita is a small Maine Coon, and she is just over 8lbs.

The Maine Coon Has Long Fur

The Maine Coon is not a short haired cat. It has long straight fur that is quite fluffy.

There’s a smooth sheen to it and is quite silky to touch.

The Maine Coon Has A Large Triangular Face

Along with large inquisitive eyes, the Maine Coon has a long flat nose that sits on a triangular shaped face.

These features are still present on a kitten, and the fact that the kitten is a Maine Coon is very important.

Maine Coons have a pronounced snout that elongates into a wedge shape. This gives a Maine Coon a set of high cheekbones.

It’s quite a distinctive look in that car breed world, so if you see this, the cat definitely has some Maine Coon heritage.

The Maine Coon has a very distinctive set of ears.

They are large and triangular ending in pointed tips.

The top of the ear will have inner hair that tufts upwards, as well as a large amount of hair at the base.

The Maine Coon has quite a lot of ear hair which is fluffy and light at the base with spiked hair towards the tip.

The Maine Coon Has A Mane

Although the ‘Maine’ from ‘Maine Coon’ refers to the State in the USA, from which it is thought to have been introduced to the continent, this breed of cat gets its looks from a lion.

They have manes where the hair around the neck is longer and more noticeable around the back of the neck.

It’s common for the mane to be more pronounced and noticeable in colder areas, or months, but summer months don’t get rid of it entirely.

The Maine Coon is built for keeping warm in cold climates.

The Maine Coon Has A Long Tail

This is a very distinguishable feature.

Maine Coons have a long tail, easily as long as their bodies, covered in thick, long, and shiny fur.

The tail isn’t ‘tufty’ but the fur is long and sleek.

The tail can also taper in length nearer the body, giving your Maine Coon’s tail more of a ‘brush’ look.

Alita, my Maine Coon doesn’t hold her tail up either.

When they walk, it’s more parallel to the body, although they can be seen displaying proudly when they want to.

While some cats can have very withdrawn eyes, a Maine Coon has very prominent, round eyes that look relatively large.

The eyes are said to give the Maine Coon as ‘intelligent’ look about them, but that’s probably ‘eye of the beholder’ stuff.

The Maine Coon Has A Luxurious Coat

The Maine Coon is the spirit of the rugged house cat. It’s a big powerful animal with a silky coat that looks really warm.

It has the look of being able to weather any storm. Maybe the Captain Coon mythology has some truth to it after all.

It has a double layered coat which has soft thick hairs as the undercoat, and a long silky overcoat to keep the frame warm in harsh climates.

The Maine Coon Has Many Colors And Patterns

There’s a great many colors available to Maine Coon owners but some are more common than others.

By far the most common pattern in Maine Coons is tabby, which describes Alita.

Alita is also brown, which is also more common than other colors.

Brown tabby with black and white streaks does seem to be a common pairing.

Although Maine Coons come in solid colors such as black, white, ginger, silver or blue.

Quite frankly there is a vast array, but not many cats come in solid colors like white.

The Maine Coon Has Big Paws

Rather unsurprisingly the Maine Coon has quite big paws that come with tufted hair.

Maine Coons have long, thick legs with large paws to serve as ‘snow boots’ when it snows.

Additionally Maine Coons can be polydactyl, which means that they may have more than the regular ‘5 toes’.

So if your cat has 6 toes on a foot then that’s an additional ‘calling card’ that you have a Maine Coon.

The Maine Coon Has A Recognizable Personality

Many people pick a Maine Coon because of their personality.

In many ways, it’s a sort of cross between a dog and a cat.

They are definitely social and friendly, but they are curious about their owners.

Maine Coons often follow their owners around the house, making sure they miss nothing.

So if the looks of your cat are very Maine Coon like, then if they follow you around then they have some Maine Coon personality as well.

If you find that they aren’t particularly needy as they follow you around that’s another tell tale factor.

Maine Coons have an intense curiosity about what their owners are doing, but they only watch to see. They don’t interject themselves in what you are doing.

It’s as if they are supervising.

The Maine Coon Trills and Chirps

The Maine Coon does what is known as trilling.

It’s a sort of elongated meow with a chirp.

It’s definitely cute, but it is really distinctive to a Maine Coon.

If your cat does anything like that, then it has some Maine Coon heritage.

The Maine Coon Is Very Friendly

While some cats can be a little standoffish, that isn’t generally the case with Maine Coons.

They are very laid back, and will quite happily come over to you and snooze right next to you.

You can easily dress them up and they don’t particularly mind. you can put harnesses on them for walks of dressage for a cat show

(Hint: Alita came 3rd in a local one here in Chiang Mai)

They get involved with all family members really easily, be it other pets or children.

They are affable to a fault and don’t scratch their owners at all. At least mine doesn’t.

If you think your cat is part Maine Coon, what are some of the signs?

Maine Coons are characterized by their distinctive body shapes. They are large cats with strong muscular frames and a triangular looking face.

They have long fluffy tails with large triangular ears with noticeable tufts.

Once you’ve owned one it’s easy to see the traits in other Maine Coons.

If you’ve never owned one then you have a treat ahead of you.

A Maine Coon has a manner all of its own which is really different from other cat breeds.

You put them all together and you get that Maine Coon fever.

So those are some of the main traits of a Maine Coon. If your cat exhibits more of them, the more likely a purebred Maine Coon it is.

While personality can be different and size is always a little questionable as you can get small Maine Coons.

My Alita is a small Maine Coon.

But she has the body physique, face shape, ears, personality, coat, and follows me around like a dog most days.

I bought her from a breeder so I know she has Maine Coon parents, but even if I didn’t know, you can definitely tell she’s a Maine Coon.

Tags :
How To Tell If Your Cat Is Part Maine Coon (14 Identifiable Features)