Can a Maine Coon Have Short Hair? 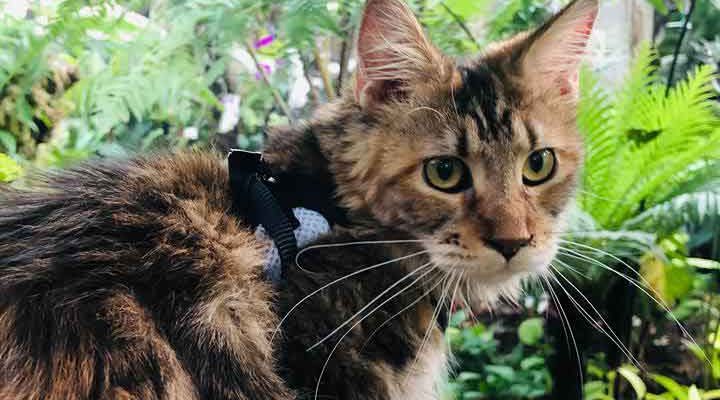 Can a Maine Coon Have Short Hair?

Even for non cat lovers, show them a picture of a Maine Coon and one of the striking features for the breed is the lovely sleek luxurious coat. The breed seems to be defined by this feature. Are there many around with shorter though?

So, can Maine Coons have short hair? In all likelihood, no, not really. Maine Coons are known for a long, silky and rough looking coat that has a ‘fluffy’ look to it. Ir pervades their body, including to the tail. The fur regulates their temperature, and provides protection. If you see a Maine Coon with shorter than normal hair, most likely it has been professionally trimmed or it is a mixed breed Maine Coon.

The Maine Coon Coat – What You Need To Know

The Maine Coon Coat At A Glance

The Maine Coon as a breed is known for its size, it’s a large breed of cat. It has a long muscular body with a long tail.

Stemming from the hardy trips across the ocean to the cold winters of Maine and New Hampshire the breed is known for its coat. To survive the harsh winters the breed has developed a very thick, double layered coat which is deceptively sleek, despite its rough and shaggy appearance.

This combination gives it a rather ‘fluffy’ like appearance.

It sheds moderately, and with a good grooming routine gives it a light fluff, which can make an already large cat, look a little bit bigger than it is.

Despite the coats rough and ready appearance it is deceptively silky to they touch. A good diet of Omega 3 and Omega 6 fatty acids keep the coat strong and healthy. Surprisingly it rarely mats, and regular combing can make matting almost non existent.

Sometimes it seems like the hair is a touch long over the stomach and trails around the legs. It can, ironically enough have a mane look as it the coat can be a little shorter over the shoulders.

It is mentioned by some people that as a Maine Coon grows older, it develops a ‘third layer’, which is characterised by being water resistant, which makes them perfect for running around snow.

It can also have slightly tufty paws, which are said to be ‘snowshoes’. 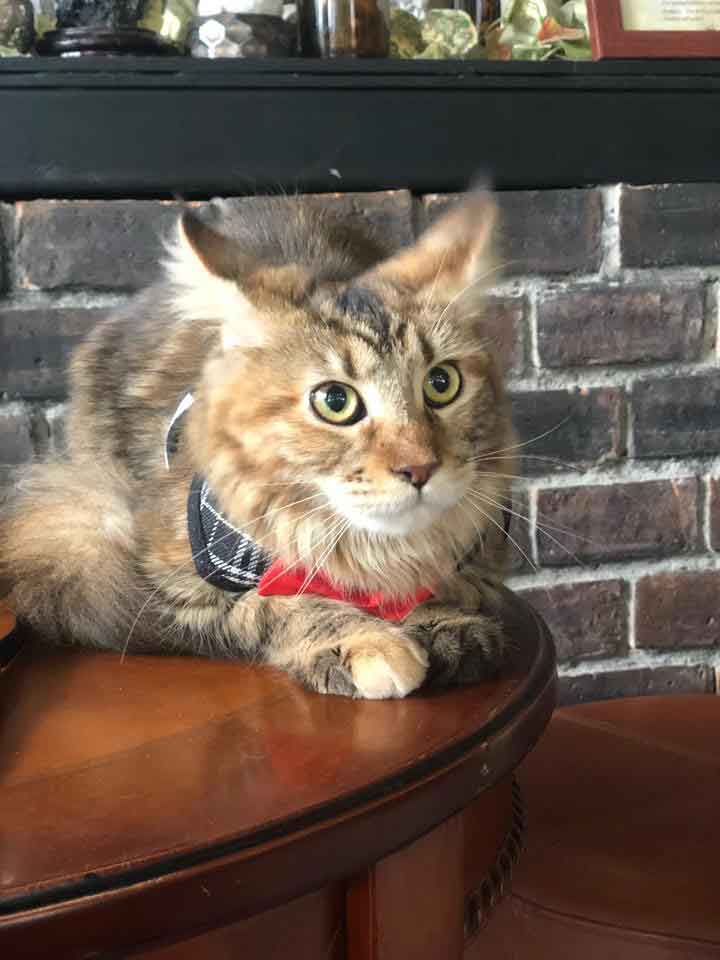 So What Does A Cat’s Coat Do?

With its sturdy appearance and a smooth, silky, shaggy like look it gives the appearance of a good farming cat, capable of performing in all weathers. In fact, looking at a Maine Coon it seems just built for that purpose.

You may not be surprised to learn that the Maine Coon’s coat is rather practical in nature. It has a few functions.

So What Is The Cost Of All That Fur?

A well groomed Maine Coon look majestic, and certainly steals the cat shows, but on the flip side, there are also responsibilities and issues that can arise taking care of all that fur.

The main things to be aware of;

Moderate Shedding: Along with a lot of fur comes the ‘a lot of loose fur’. You will need to keep on top of the grooming schedule.

Dirty Fur: With a heavy coat that has a rough and shaggy appearance, the Maine Coon has a very light film of hair on the outer layer. Unfortunately, this collects dust a bit like a cloth. It can also snag small twigs and debris. Grooming becomes important.

Matted Fur: The Maine Coon does not mat that easily, which is a surprise really, however, a very active Maine Coon that doesn’t groom itself as much as it should can run into matting problems, so double check up on that grooming.

Hairballs: Any long haired cat is more prone to hairballs than a shorter haired one. With loose fur and a lax grooming schedule, your Maine Coon will swallow fur and produce hairballs. Keep loose fur to a minimum.

So What If I See A Maine Coon With Short Hair?

With all this talk of long fur and shaggy silky coats, you may be wondering if it is possible that any are born with short hair.

Unfortunately, the answer is probably no, as almost all Maine Coons that are purebred have long fur.

If you see one there are two main possibilities 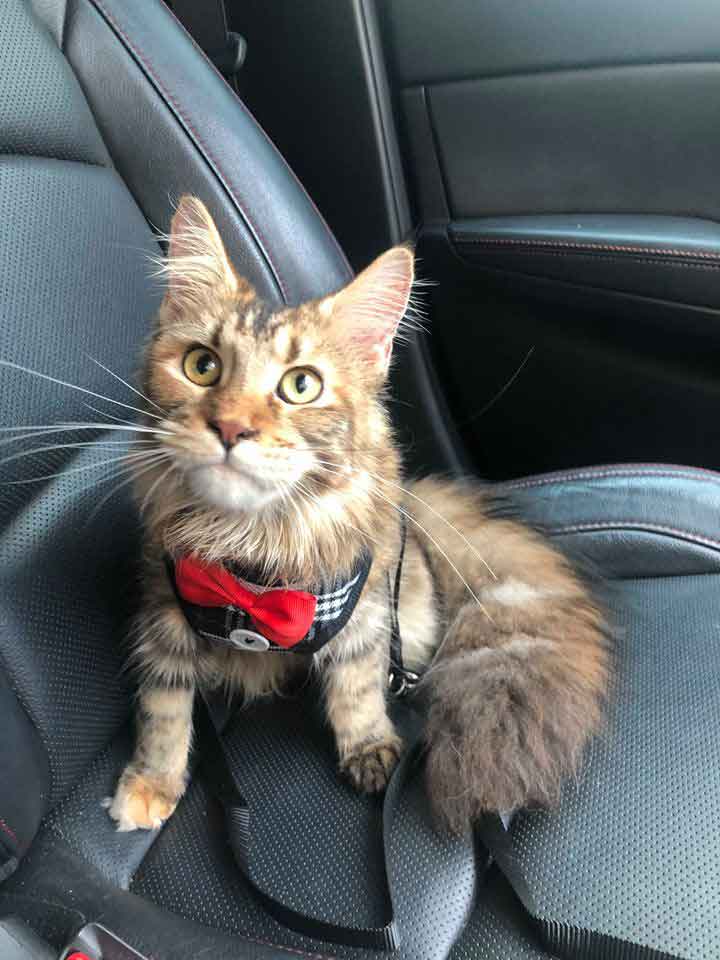 Should You Trim The Coat?

So using logic, if it’s really hot, a short and trimmed cat will be cooler. Right?

Wrong? I know, I was surprised when I learned this as well.

If you want a slightly shorter haired Maine Coon, then that’s fine, there may be very valid reasons for doing so, but you should be aware of the effects it might have on them.

There’s an argument to be made that it can be a painful and traumatic experience for them. Remember, cats don’t have barber shops. Suddenly shorter hair can be quite a shock to their system.

Fur Is A Built In Insulator: Their fur is a very natural regulator of their temperature. Your cat doesn’t get overly hot (very high temperatures aside), and the same coat will regulate keeping warm in winter. It’s much more effective than you might realise.

Your Maine Coon Sheds: Shedding is a sign of a healthy regulatory system in cats. A high protein diet for Maine Coon is a good idea as the long fur is a lot of keratin (which is protein). You don’t need to trim the fur to reduce shedding, as short haired cats can shed just as much.

If You Are Afraid Of Matting Fur: The fact is there are simpler methods. Simple brushing and grooming will keep mats at bay.

The fact is that a daily routine of grooming and a good high protein diet is good for a Maine Coons fur. Nothing more need be considered.

Many people consider trimming their Maine Coons fur simply to alter the look.

I have a post on the pros and cons of the lion cut if you care to read more.

There are several effects that trimming can do to any cat. As well as interfering with the ability to regulate their temperature there are a few other issues.

The first is the shock of seeing themselves with a different look. You are used to your monthly trips to a barber, and you are expecting a different hair style. Your cat doesn’t. A sudden change can have serious effects, which you may not discover until it’s too late.

If you do need to trim your cat, do it in gradual trims and not too sudden.

They also use fur as a sensory guide when they go out. They are used to it being a certain length. Sure, they will get used to it, but they are used to going through gaps and ‘feeling’ the space by the feedback from the hair against walls and spaces.

Fur also protects them from scratches and scrapes. It is a buffer against another cats claws. With a trim you are lowering their protection. 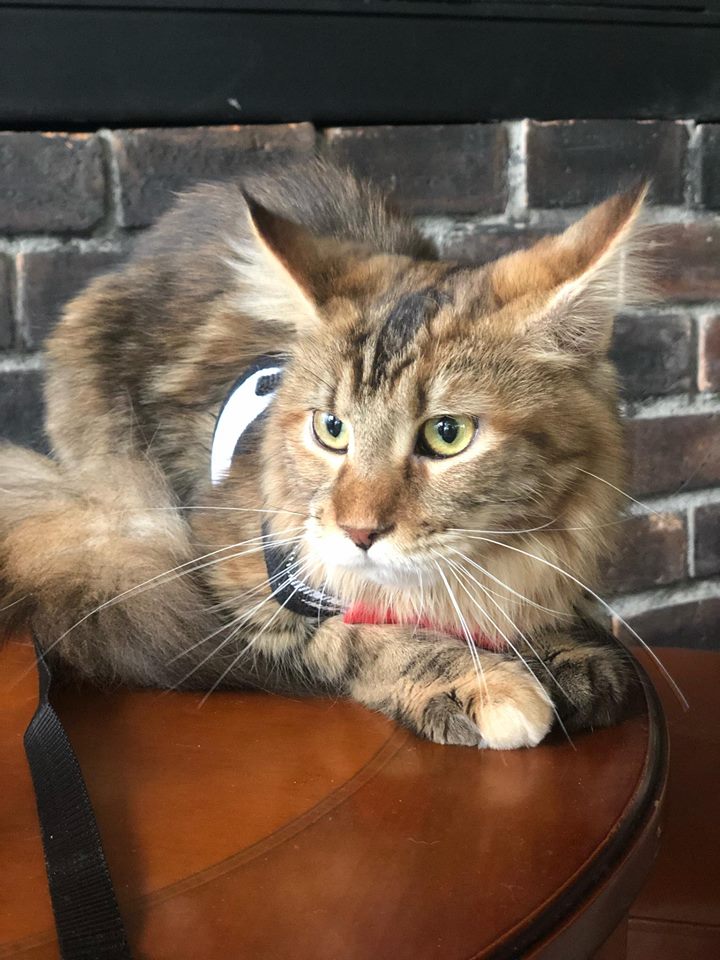 The Maine Coon has a coat that is the envy of every other cat breed. It offers serious protection, looks amazing and helps regulate their temperature in all manner of environments. Both hot and cold. Trimming the hair down simply interferes with the cats natural ability to help itself.

A well maintained coat provided by a good, healthy and high protein diet coupled with a regular bathing and brushing will keep it looking fantastic and mat free.

As discussed above, a Maine Coon with a short coat is likely to be a mixed breed, or has been to a professional groomer recently. There may be good reasons for that, such as surgery.

So the true answer is they don’t seem to have short hair by their own accord, in nature.

You can of course trim the hair, if it is medically advised or you prefer a slightly different look.

In all probability though, your Maine Coon doesn’t NEED to have its hair shorter. While a seriously matted coat from a neglected Maine Coon it may be advised, simple grooming produces the effects you may wish for.

What is worth mentioning is that you could effectively be taking away the cats ability to cool itself, which can paradoxically lead to overheating and dehydration, which could prove catastrophic.

For my part, I try not to interfere, and just groom Alita regularly to help her help herself, and I leave it at that.

Tags :
Can a Maine Coon Have Short Hair?

1 thought on “Can a Maine Coon Have Short Hair?”

Alita likes to be a part in my life. She wants to

Our fev. place ( I think she also likes here) it's

The day that my neighbour came to visit . He was s

There is a cat lover event at a mall in my city. A

My dinner, my mom is so kind today, she made boil

Hello! If you are thinking to have a cat, I recomm

At a cafe in chiang mai, I really like to go outsi

Thank you for the presents.🙏🙏we will have go

I enjoying a trip out to the Mae Sa waterfall , wa

My mom always worry about my weight, she thinks I'