The cat vs mouse war. Long have they been depicted as arch enemies of the animal world. Although it’s a bit tricky to answer this question, the short answer is yes, Maine Coons are one of the very best breeds you can have to take care of vermin problems.

There are several reputable sources that list the Maine Coon as a favorite breed to choose if you wish to control the proliferation of mice and rats about the habitat.

Another breed that has inhabited the country for centuries, the Maine Coon has been held in high regard for its abilities as a mouser since the colonial period in its home state.

A well regarded prepper site, OffTheGrid news in an article lists it at number 1 as a mouser, citing

Their great advantage on the homestead, aside from being extremely loving and sociable creatures, is that they are rodent-slaughtering machines. My own Maine coon has destroyed much of the rat and mouse population around my house and has moved on to cleaning up the neighbor’s property, as well, much to their delight. This hearty northern breed is pretty much a must-have cat around the homestead or farm, and is perhaps the closest thing to a dog you can get in cuddly cat form.

If you do a bit of online searching, there are numerous places that back up this, so rest assured, if you have a mouse problem before you get a Maine Coon, in no time at all you may well not be so worried. 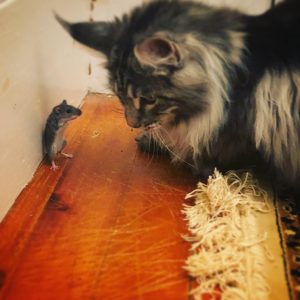 Here we take look at where this stereotype originated from and if our favourite breed, the Maine Coon, is as good at hunting mice as the rest of their feline community. It’s a well known fact that our Egyptian ancestors were huge fans of cats. And this love of felines continued throughout history.

It was common practice for sailors to use a cat’s natural hunting abilities to their advantage. They would take them aboard their ships to keep their vessels free from vermin, as well as for comfort and company.

This also contributed to the spread of cats throughout the world, and they soon became the domestic house cat that we all love and value within our homes today. Maine Coons were initially bred specifically to be used as mousers. Their built in hunting instinct and bold stamina made them one of the best breeds for catching mice.

How To Tell If Your Cat Is A Good Mouser

Firstly, finding out some background knowledge will help you know if your cat will grow up to be a helpful mouser.

A lot of cats will be taught to hunt as kittens by their mother. Usually using cat toys as their prey as their younger and then venturing out into their outdoor surroundings to use actually mice to fulfil their hunting urges.

If you re-homed a Maine Coon from a shelter, see if you can find out where it came from originally. If they’ve lived somewhere where they’ve been allowed to roam freely outside, it’s likely that they’ve been able to build upon their hunting skills, which will be embedded within their natural instincts. 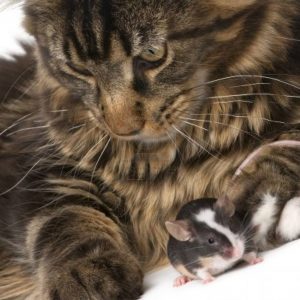 Neutered cats are known to be better mousers. Their main focus will be to hunt vermin rather than mating. So, if mousing is a quality you want your cat to possess, consider getting them neutered.

Watching how your cat behaves around your home is a great indicator as to whether they’ll be a good mouser. Your cat should be very observant of its surroundings and will often hear or see things before anyone else. Observe how they play with their toys. Many cats will use their hunting skills to slowly creep up and pounce on their toys. This is a great, safe way for your cat to practice their abilities.

They may often carry their toys around in their mouth like a trophy. This is often what cats do when they’ve caught their prey. This shows a sign of power and confidence that they’ve managed to successfully hunt their enemy.

They will watch anything out of the ordinary with great interest, noticing every move with their ears up and the eyes fixed. This shows they are intelligently thinking about if they are going to make a move, or make the decision that it’s not worth using their energy to further investigate. As we know, Maine Coons can grow larger than other standard house cats. In the hunting world, this can be both an advantage and a disadvantage.

Once they have grown to their full size, mousing in smaller, tighter spaces may become more difficult for them. However, the power that comes with their size will work in their favour, and catching mice, or even their larger cousins, rats, will become childsplay.

Although Maine Coons were originally bred to be mousers, other breeds also have great skills in the mousing world. Persian, Manx and American Shorthair are in the top 10, alongside Maine Coon, as the best hunting breeds.

Just like Maine Coons, American Shorthairs have a soft temperament, as well as exceptional hunting abilities. Making them good to have as house pets for single people to families alike. They’ll be warm and affectionate around people but their instinct to hunt will still be one of their top priorities.

You shouldn’t need to train your cat to become an efficient mouser. As we’ve said, it’s within their nature and they have inbuilt hunting instincts instilled within their DNA, from their late ancestors.

If you want to help your cat work on their mousing skills, you can play games with them. Hiding their toys, or playing with their toys as if they’re alive and moving around, is a great way to peak your cats interest and will let you observe how they go about using their intelligence. As most people know, cats will play with laser pen pointers for hours. Using one during play time will allow you to see their dexterity and agility when moving about to catch the laser. You’ll also see them crouch down, and creep up to it as if they’re going to pounce, it really is fascinating to watch. 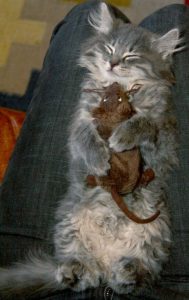 Many cats will bring back their victims as trophies to show off to you, this is known to be a sign of affection. Many street cats will take offerings of dead mice to homeowners, with the intention of being taken off the street and given a nice warm home to live in.

If you’re wanting your cat to catch mice, reward it with a treat for bringing you their winnings. Even though it’s not a pretty sight to have to deal with, it will show your cat that they’re doing a good job and reinforce their passion to hunt.

As your Maine Coon becomes more confident, they will start to use their hunting skills on a daily basis. So be sure to keep their mandatory vaccinations up to date. Rats and mice are not known for their cleanliness, which means that your new mouser will be more susceptible to diseases.

Speak to your veterinarian if you have any concerns. They will give you their professional advice on how to best look after your cat.

Overall, all cats are born with the natural instinct to hunt and catch their well known rival. It’s within their ancestry, and although domesticated cats don’t necessarily need to hunt for their food, our feline friends’ favourite pastime will continue to be a natural ability for years to come.